She was seen walking away after the shove asking: “Did you just see that?”

Fans were not impressed, with one writing: “Luca shoving Gemma oh hell nawwwwwww.”

Another wrote: “Did Luca just shove Gemma cause he’s seen Adam introducing himself to her?”

A third tweeted: “Luca you weirdo how you behaving like this over Adam having a conversation with Gemma.” 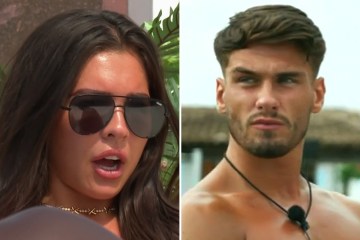 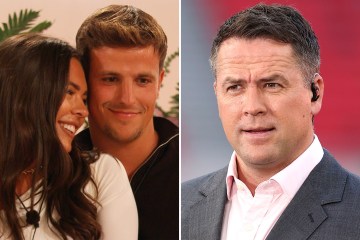 Another told him simply: “Grow up” while one shocked viewer wrote: “What the hell?”

Luca and the boys returned from their spa day to find there was a new boy in the villa.

However, he wasn’t even that new – with Adam a villa veteran renowned for his bed-hopping on the show.

The reality star chatted up Gemma while Luca was away, with the fishmonger returning to the sights of the celebrity hunk with his girl.

He hollered cheerfully: “Honey, I’m home” but his face dropped when he saw the new lad.

His timing was especially unfortunate as Adam had just finished telling Gemma he liked her.

Gemma had asked him: “Where’s your head at?”

He replied: “I am an open book. I want to see if I can get to know everyone.

“But I’m not going to lie, if we’re going just off previous relationships with looks it would be you and Paige.

She replied: “Really?” He replied, as the boys wandered over: “Off looks. But we’ll see.”